Such a fun time! I loved the country atmosphere and the live band that performed!
Review for Daiquiri Deck | St. Armands Circle by Grayson
Rating:

Daiquiris are delicious! The restaurant atmosphere is so much fun and it is a great place to go with some friends!
Review for Thai Wasabi by Holly
Rating:

Thai Wasabi is a full-service spot perfect for lunch or dinner. They've got a separate sushi menu too. I really like their tuna tataki app!
Review for Office Bar srq. by Nicholas
Rating:

Office Bar srq is one of the best sports bars in Sarasota! Definitely a good laid back neighborhood bar in Sarasota
Review for Hob Nob Drive in Restaurant Sarasota by Noah
Rating:

Hob Nob is such a cute little throwback diner! It has a very basic menu but it is all delicious!
Pros: Great food Friendly Staff 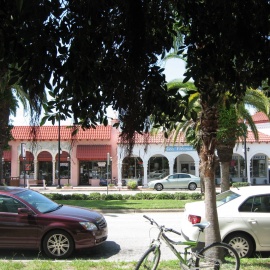 Hotels & Things to Do in Venice

Sharky's On the Pier

Off The Wagon Brewery & Kitchen

Sharky's On the Pier

The City of Venice was settled after the Civil War in the late 19th century through the Homestead Act of 1862. A village beach resort was planned and the Brotherhood of Locomotive Engineers provided the capital. Soon, schools, playgrounds, parks, and a civic center were built. At the turn of the century, when large industries were no longer economically viable and environmentally practicable, Venice transformed into a tourist destination. Venice boasts 14 miles of beaches from Casey Key to Manasota Key. Venice is home to a plethora of small businesses and popular restaurants and Venice Beach is located right on the Gulf of Mexico. Venice is primarily a sleepy fishing town; from early spring to late fall, Venice Beach  tourists primarily look forward to fishing. The warm waters of the Gulf of Mexico attract a wide variety of fish species, including the incredibly large king mackerel. The other fishes to catch while trawling the coast are groupers, Spanish mackerels, mangrove snappers, blackfin tunas, cobias, and greater amberjacks. Besides fishing, Venice Beach offers international gastronomic delights, from steaks to seafoods, from Cuban and Mexican to Italian, Indian, and Chinese cuisines. Year-round, Venice is a popular destination for finding and collecting shark teeth. Venice is known as the "Shark Tooth Capital of the World." Most restaurants offer live entertainment and are conveniently located near shopping centers, such as the Bird Bay Plaza, the Tamiami Trail, the Brickyard Center, and the Jacaranda Plaza. Venice is also a Florida Main Street City--its downtown has landscaped streets and northern Italian architecture that is original to its 1925 design plan and akin to the Italian city for which it was named. After shopping, dining, and frolicking at the beach, tourists can go to nearby attractions at Venice Beach, such as the Jungle Gardens, the Florida Aquarium, and the Ringling Museum.

Things To Do in Sarasota This Holiday Season

With a stressful year soon behind us, now is the time to try and end your 2020 right by taking part in some of these exciting holiday events in Sarasota. Get your stockings out and g

Are you craving an adventure and to actually leave your house this weekend? These things to do in Sarasota and Bradenton are the perfect getaway for those looking to try somethin

Need to get out of the house for even just a minute? For those people, these are the top things to do in Sarasota this weekend and are perfect for any couch-locked loc

Best Places To Party on Halloween Night in Sarasota

Looking for the best places to party on Halloween night in Sarasota and Bradenton? These Halloween events in Sarasota are happening on the night of the spookiest holiday of the y

Halloween in Sarasota and Bradenton is always packed with fun and surprises. With so much going on and with so many Halloween eve

Where To Go Running in Sarasota and Bradenton

For fitness geeks, you may be looking for where to go running in Sarasota and Bradenton to shred some calories. From parks in Sarasota to Bradenton running trails, th

Best Places To Get a Tan in Sarasota and Bradenton

For summer lovers, you may be looking for where to go tanning in Sarasota and Bradenton so you can get keep your bronzed look any time of the year. Being in the sunshine state, there are several unique...

Roll On Down To the Best Sushi in Sarasota

Some sushi bars in Sarasota say they have the best sushi around. We've asked locals and narrowed down your search for the

6 Parks in Sarasota You Must Visit During the Fall

If you want to get out of the house this fall and enjoy the cooler days, these parks in Sarasota are perfect for outdoor adventures. From playgrounds

For those looking to eat healthy and delicious, you need to try the best acai bowls in Sarasota. Acai in Sarasota is one of the best health-conscious meals with nutritious fruits, veggies, and toppings...

Unique Things To Do in Sarasota and Bradenton

For those who want to get out of the house and try something different, check out this guide for the most unique things to do in Sarasota and Bradenton. From the bluest bea

Where You Can Go Camping in Sarasota and Bradenton

Looking for something to do in the great outdoors? Get a first-hand overnight experience at these places to go camping in Sarasota and Bradenton. These ca

Where To Go Fishing in Sarasota and Bradenton

Whether you are fishing in Sarasota or Bradenton for fun, competition, or to try and put food on your table; these charters, beaches, and parks are your best bet to

To get the pleasure of dining outdoors in Florida, but its the rainy season, which Sarasota restaurants can you count on to have rain-proof patios? These

Some of us love to be in the great outdoors, and there is no better way to experience nature than to go hiking in Sarasota and Bradenton. For those wanting to get outside

Outdoor Attractions in Sarasota and Bradenton

If you need to experience the great outdoors, these attractions in Sarasota and Bradenton are sure to fill your thirst for adventure. These outdoor activities in Sarasot

Breweries in Sarasota and Bradenton Serving Beer To Go

If you get a craving for a cold one but don't know where to look, this guide has all the best breweries in Sarasota and Bradenton serving beer to go. From small local bre

National Fajita Day is coming up on August 18, and it's time to vote for your favorite Mexican restaurant in Sarasota and Bradenton. Whether you like your st

Restaurants in Sarasota with Curbside Pickup

A quick meal that isn't necessarily fast food is hard to find, but these restaurants in Sarasota have curbside pickup for your convenience. If you want to dine in the comf

Do You Love Ice Cream? Vote On Your Favorite Ice Cream Shops in Venice for National Ice Cream Month

National Ice Cream Month is all July long and 941area is asking the question, who has the best

Top Beaches for 4th of July in Sarasota

Fourth of July in Sarasota can be celebrated pretty much anywhere, but where do we all really want to be for the long-standing American tradition? These

There's never been a better time to want to support local restaurants in Sarasota. With everything going on it's a great idea to support the smaller businesses so you can give

The Sarasota area has a wide selection of upscale and noteworthy steakhouses, ranging from Japanese steakhouses to Mediterranean and more traditional options. Whether you're in the mood to get dressed...

If you are on a mission to find the best pizza in Sarasota, this guide has all the best slice hotspots nearby. Thin crust or Chicago style, these pizzeri

Things To Do in Sarasota and Bradenton this Weekend: December 12-15

There are plenty of activities to do in Sarasota and Bradenton this weekend. Embrace the holidays at one of these

The #1 Fossil Festival in the Shark's Tooth Capital, Venice, FL

Venice Farmers Market Every Saturday at 8 am â€“ 1 pm!